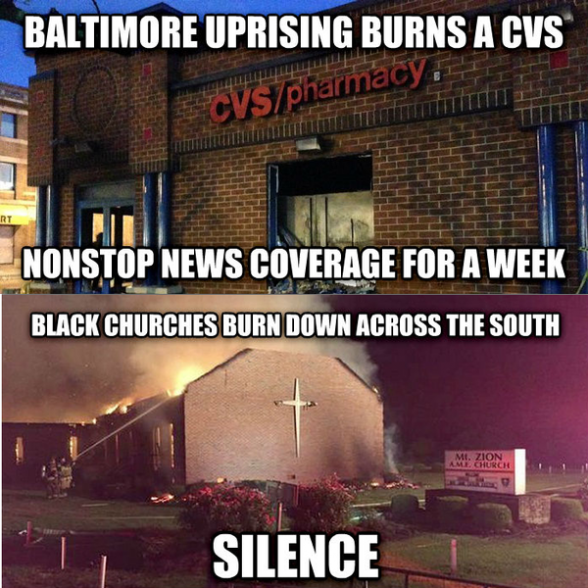 This should challenge some Media and Racial Conspiracy theorists. Here are two arguments i come across quite often. One is that the media’s coverage of unarmed black people being killed by Police or Vigilante’s is part of some greater scheme to exploit fake racial conflict to achieve some greater evil. This same argument is used for any type of racial conflict being covered in the Media where a black person is the victim.
The 2nd is the Government or Obama are working with the Media to selectively highlight these issues because they desire a race war. Where black people who are only 12% of the population are pitted against white people who are 70%.
So if a racial conflict with a black person or persons as the victim being covered in the media is just something fabricated or is covered disproportionately to achieve some evil scheme. Then explain to your audience why Five black church fires in six days following the white supremacist terrorist attack in Charleston is not being reported in very high frequency across the majority of the media outlets? This would be the perfect ammo for this alleged scheme. They are black churches and historically they have been targets of racist terrorists. The first Terrorist laws passed in the United states were in regards to black Church bombings.

Again if the Media and/or the Government’s primary reason for reporting on racial issues where black people are the victim so they can achieve some great evil like a race riot or dividing the country based on false premises. Then explain to me why all of the parties who are involved in this alleged plot is not reporting on all of these Church fires with the same frequency as some of the other racial issues. It is a legitimate news story. It’s not like there are white church fires which are also not being reported.

How, why and what the Media reports is not this simple. And black people only wish the Media for some reason was on their side and are their Champion. But there are countless of other things which proves that this is not true. Like the recent Meet the Press episode.

So question? Why isn’t the Media giving this frequent and consistent coverage enough to dominate the news cycles?
Here is a list of the Church fires as of today.
Knoxville 6/21
Macon GA 6/23
Charlotte, NC 6/24
Warrenville SC 6/26
Tallahassee TN  6/26
Greeleyville SC 6/30

6 Black Churches Have Burned In the South, Here’s what the Media Isn’t telling you