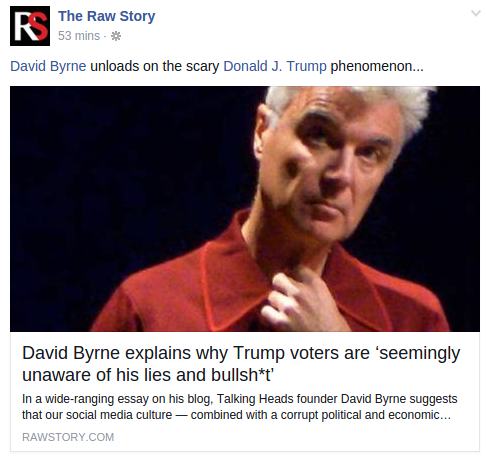 The Echo Chamber Effect
What David Byrne says is true but this is not limited to Trump Supporters. By describing the “echo chamber” effect with Trump supporters this in itself may reinforce the echo chamber created by non trump supporters. One may commit to the error that this phenomena is limited to Trump supporters or their opposition.
Read this piece and replace Trump with
Hilary , Sanders, Carson, Liberals, Conservatives, Chemtrail conspiracy theorists, Sandy Hook Conspiracy theorists, Santa Claus sightings (yes full grown adults claim to see Santa Claus every December) environmentalists, Pro Fossil fuels, Libertarians, Natural Cures, Anti Racists, Racists Deniers, Mens Rights, Feminists, etc
None of us can be right all the time. We are all fallible. Some groups may be far more fallible and full of errors than others. But even the ones which may be more accurate than not, they will rarely if ever know when they are wrong if they only surround themselves with people, news sites, blogs, facebook pages, youtube channels that confirm their belief. When they do they have to think. It may not be in the interest of the the people/ sources they surround themselves with to let them know that something they have been passing around has been undermined by contrary evidence/ information.
Just think. Hasn’t there been something that someone who supports an opposite ideology of some sort from you has been passing around that you have seen debunked weeks maybe months ago?
You criticize them for the “echo chamber” effect but you may be guilty of the same thing. I’ll give you an example using recent political campaign.
I’ve seen liberals and Sanders supporters pointing out how dumb Trump supporters are for believing some outrageous things which have been debunked a long time ago. Yet the same Sanders supporters are still posting a photo of Sanders allegedly in a March with Dr. Martin Luther King which has been debunked weeks ago as not being him. The reason why they have no idea that this is false is because they only surround themselves and seek out information that is Pro Bernie Sanders. So the likelihood that they will encounter info from his own campaign where they have said it wasn’t him in the photo is greatly diminished. Basically we have people in one echo chamber criticizing other people for being in a different echo chamber.
I’ll give you another one. There are pro gun advocates who are very critical of gun regulation who always argue that gun bans contribute to more crime. They are still passing around memes based on the premise that Chicago has a hand gun ban and doesn’t allow concealed carry. Almost 3 years ago the gun ban was over turned and Chicago has concealed carry. Many of these people STILL have no clue that Chicago has concealed carry and keep posting criticism of Chicago’s gun ban.
The other problem with this is people who are that heavily invested in a belief have the least amount of interest in seeking information with the intent of investigating if their belief holds true. They have trust that their echo chamber is full of sound and reasonable arguments. That’s suspending reasoning for faith.
Here’s a link to the original story

You are not so smart- confirmation bias
Echo Chamber – rational Wiki

The Webs Echo Chamber Leaves Us None The Wiser

The Trouble With the Echo Chamber Online