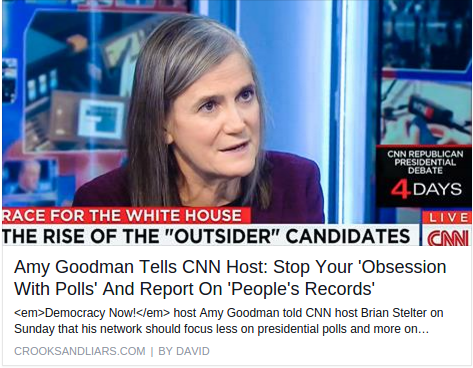 “I would love the media, there to be a month without polls. What is the value of these polls? If I am making a decision about a candidate, I want to weigh their record.”
“Do I care what my neighbor thinks or the person next to me? I want to make an independent decision.”
— Amy Goodman

The Ad Populum fallacy is a logical error where someone accepts something as true or legitimate simply because a lot of people accept or believe it.
A common case is the Fox News defenders. When someone criticized fox news their defenders would point at the networks ratings. As if the criticism is invalid simply because a lot of people like or watch the network. A lot of people believing in something has nothing to do with whether what they believe in is true or not.
(Side note: An easy way to blow up the Fox News ratings defense is to point out how ABC, NBC and CBS network news gets in the area of 20 million views compared to Fox’s 2 million. They normally subscribe to the theory that all media outside of Fox News Channel is Liberal. Well if high ratings alone proves legitimacy of a news network then that means the liberal media is legit since network news has higher ratings than Fox on cable. They should see the flaw in their appeal to popularity error when presented with this. )

Think about how many people believed the Sun revolved around the earth or that the earth was flat. Are those ideas true simply because a lot of people believe it? At one time people believed that a woman could not get pregnant if she was standing up. I can just imagine some of the interesting positions people had sex in thinking that a pregnancy could be averted only to end up having a child 9 months later.

The truth of the matter is the general public supports and believes things that they may not be well informed on. Back when the Affordable Care Act was being debated the “public option” was highly contested between the right and left wing. Supporters of the public option always pointed out how polling data showed that the general public was highly supportive of the pubic option. But if you look at some of the same polls when the very people who supported the public option was asked about it they didn’t really understand what it was. This didn’t stop proponents of it from pointing out how popular it is.

In the case of Donald Trump he uses the Fox News Defense. He refers to his polling popularity as a rebuttal to criticisms about his substance and his positions. Amy Goodman’s criticism of the media is that they are constantly showing data of how popular each candidate is instead of presenting their policies and positions to their viewing audience.

Popular Appeal or appeal to the majority