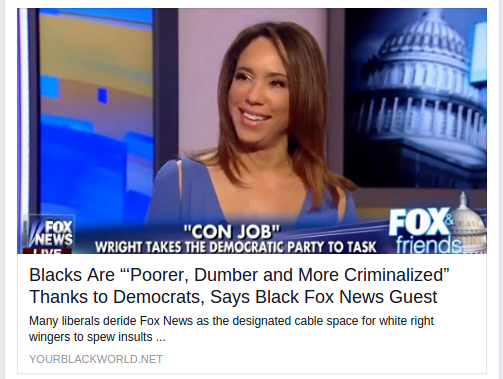 Crystal Wright from Conservative Black Chick .com Uses Statistical Trickery in order to play to false stereotypes and fears many Americans have of Black people. I will refute and expose the tactics so if you all encounter this you will know how to handle it. But first lets talk about Black conservatives who intentionally do this against their own race for profit.

I’ve been dealing with people both liberal and conservative who peddle falsehoods about black people using statistical trickery for a long while. The liberal usually acts concerned and caring while the conservative usually pushes negativity off of this premise they both achieve the same consequence of keeping false stereotypes about black people propped up in our mainstream media and political discourse.

When someone brings up the black on black crime or the 93% number. First ask them if they are aware of the stats of every other race and the rate they commit crime against their own. Usually they have no idea.
Ask them what is the total population of black people in the United States. The number is around 41 to 45 million. Ask them out of that 41 million how many of them make up this 93% statistic. The number will be very, very low. Which proves that the over whelming vast majority of black people are not committing crimes.

An example of how this work. The most common stat the racist peddler will use is the homicide number. They select that particular crime because the gross number is very high for intra-racial homicide among black people in respect of their total population numbers.

So in the year 2013 out of 41 million black people only 2,245 were murdered by another black person. This is not accounting for someone who killed 4 or 5 at one time or someone who has killed multiple people. For the sake of this lets just assume it is one murder for each killer.

Lets look at total arrests.
in the year 2013 there were 2,549,655 black people arrested. That’s including everything from Murder to Disorderly conduct.

The percentage of black people who were arrested out of 41 million is 6.21%

These number get really tiny when you start crunching them for specific types of crime.

Conclusion. Many people have a lack of critical thinking skills. Which is why most of the population including black people are led to believe falsehoods about the black population. But some people are smart enough to know better like Crystal Wright who suggests she is a free thinker and stereotype buster on her website. If she truly was would she have taken statistics out of context for the purpose of reinforcing false stereotypes about black people?

here is the segment from Fox News

Commentary where I copied this image from

5 Facts that Shatter the Black On Black Crime Myth