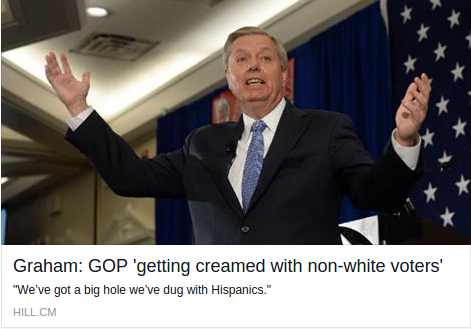 I spoke to a Republican campaign organizer back in 2008. She was running a strategy for a Black tea party guy who was running for Governor. She asked me what i suggested for him to be able to reach out to get more black voters. I told her that if you follow my advice you will have no problem getting black voters with out even compromising on your conservative values.

1. Do not peddle the bogus stereotype that black and brown folks Only vote for democrats for Welfare, hand outs and free stuff. (only 11% of black people are unemployed)

2. Don’t say the racial inflammatory and insulting phrase containing anything in reference to Slavery plantations. ex. Democratic Plantation or going to rescue black people from a plantation,etc.

3. Don’t take the opposite position on all racial issues that black people collectively are in support of. It’s okay to be against some of them and in support for them on others. But if you are against them on every single issue that comes up it just appears that logic isn’t being applied. And you are only opposing them for the sake of opposing them.

4. If someone from the Right wing especially senior GOP party/elected officials say something Racist. Do NOT try to point at some type of racism from the left or the Democrats. (especially from the damn 1800’s) This creates a racist “safe haven” in your party. Which people of color are well aware that this tactic is used to keep away from having to criticize racism from your own party by pointing at alleged racism from another party. What this says is “as long as they have racists then we have the right to have racists”. Instead of I’ll condemn my racists and attack them. But you should check yours as well. If you sweep your house clean of any potential racists then any so called alleged racists on the Democrat side will be the ONLY racists between the two parties. That means your party becomes the party where racists are not safe which puts Democrats in a bad position. Democrats don’t have to even cater or pander to the black community at all. All they have to do is point out that the other side is MORE racists than they are. You’ll pull this support right from under them.

7. There are 10 black communities with a median income ranging from 76k to 156k. Explain how your policies can help create even more of their communities to that list. (this means abandoning the nonsense of pointing out one successful black person as evidence that they be successful in lieu of messaging that points out that very large number of black people have tons of money and are successful. )
You know what another Political analyst said? He said black people were too small of a demographic to even bother applying what i am suggesting. And that the conservative base has too many people who believe the false stereotypes are the absolute truth. And that black people need to be put in their place. Bucking against those stereotypes is too Risky because it may lose far more white voters from their base while only gaining a few black voters.

Unfortunately any Black Conservative who wants to be successful must also stick with this tried and true formula. It alienates black voters but garners a lot of white support. White voters are from a pool of 70% of the population. While the black vote is only from a pool of 12% of the population. You have a better chance of getting more people from the 70% group than you will from the 12% group. Losing the Hispanic vote wasn’t calculated in their 2008 strategy. So now they are looking to get that vote back which will mean they can still ignore the black vote.

A common criticism of my suggestions here is “Why would you want to help conservatives? Do you want a tea partier in officer or a conservative to win?”

My answer:  That’s not my objective. My objective is to help reduce racism in politics. Hopefully eliminate it from our national political discourse.   If it appears that conservatives are more racist than democrats then most non white voters will vote for democrats on this premise alone. Which means that Democrats can win their vote with out actually doing anything for them. They can campaign on not being racist while pointing at the conservatives as being racist.   This is a formula that has worked for a long time.    We all agree that Racism and negative Racial messaging in the Media and our mainstream political discourse is bad and harmful for the groups who are the targets of such speech.  If we agree with this than we should also agree that less of this speech is also good for the group most commonly targeted by this speech.  So Democrats and Left wing people should support efforts to eliminate negative racial messaging from our mainstream political discourse.  I suspect the reason why they don’t is because they politically benefit from conservatives being criticized for their negative racial messaging.  Which suggests that liberals and democrats are not truly against this type of speech.  They only want to be able to benefit from it’s existence during national elections. And that is bad for everyone.

Image and article from the Hill
Further Reading:
How to be a successful black conservative by Vanessa  Jean-Louis

10 Conservatives Who Have Praised American Slavery by Mark Howard