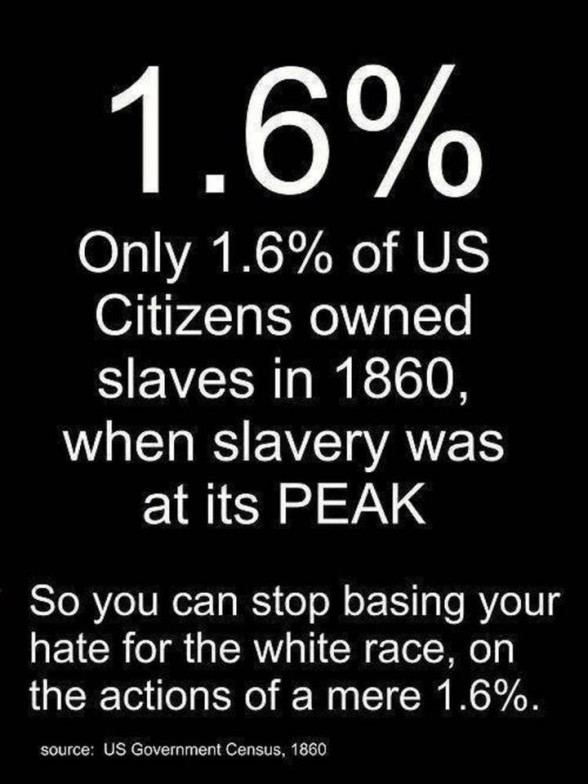 This Meme is suggesting that someone is hating the entire white race on the actions of just 1.6%.
It sites the U.S. Census as it’s source for the percentage of the population who were slave owners.

The trick with this type of meme is the alleged source citation at the bottom of the meme “US Government Census 1860” leads people to believe that it is a legitimate number. The Author is hoping their audience is not going to actually research this number to verify it’s accuracy. This is how lots of misinformation can spread rapidly.

Well I actually went to investigate the accuracy of the meme’s premise that only 1.6% of the US population owned slaves by going to the US Census. It’s much higher than that.

But before we get into that the United States at the time did make up of multiple races of people. Yes “White” people may have been the majority but they were not the entirety of the U.S. Population. Since the meme is specifically talking about an alleged hate of the white race based on this 1.6% number then shouldn’t they have provided what percentage of white people actually owned slaves?
That’s one error. Now on to this 1.6% number.
I have the US census stats between 1790 and 1850 which you can review right here.
Not 1860. But if we accept the meme’s suggestion that 1860 was when slavery was at it’s peak then that would mean any year preceding 1860 would have a lower percentage of the population for slave ownership right? Well that is what the meme wants you to think anyway.
In 1790 the total percentage of the US population that owned slaves was 17% which is roughly 1 out of 6. In 1850 that number was 13% which is close to 1 out of 7. A lot higher than 1.6% But to get a full context of the slave ownership in the United States you want to look at each region’s and each states percentage of slave ownership.

So no matter which way you look at it there is no number that comes as close to the meme’s suggested 1.6% number from any selected time period. The lowest was 13% and the highest was 17% and in the south it ranged from 31- 34%
With out even arguing any of the other points in the meme you can just disregard it since it’s opening premise is false and it’s suggestion that this number came from the US census is also False.