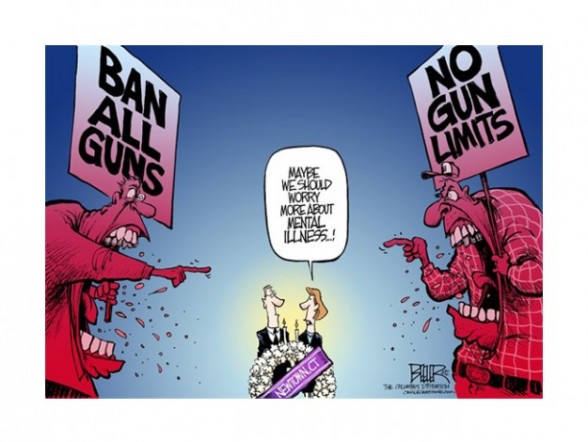 I’m calling B.S. on the prevailing popular arguments from both political wings on guns.

A common right wing argument is that more guns and less restrictive gun laws has a correlation with less crime and gun violence.

A common Left wing argument is less guns and more restrictive gun laws has a correlation with less crime and gun violence.

The Knee Jerk reaction by liberals to immediately start talking about new gun laws after every tragedy or conservatives arguing that more guns or some master marksmen civilian being near the crime scene is the equivalent of someone putting anti itch cream on their privates because they have athletes foot. With the exception of the Virginia Tech shooting most gun laws people advocate after a Tragedy would NOT have prevented the tragedy from happening if the proposed law was in place prior to the tragedy. So convince me of what gun law would prevent the tragedy at hand or past tragedy.

The correlation no one talks about is the Gap between the rich and the poor. If you look at the industrial rich countries and compare them, you’ll see the wider the gap between the rich and poor correlates with the increase of crime. Yet neither side has been pushing this as something which creates an atmosphere that is ripe for people looking at violence or crime as a necessary means.
I suspect the reason why neither side offers the wealth gap as a possible source is because it undermines both of their prevailing arguments around guns. And may expose both of them for using gun tragedies to advance their other political objectives.

If you look at industrial rich countries you’ll see places like Switzerland that has the highest amount of gun ownership in the world next to United States yet Switzerland’s Homicide Rate is Very close to France which has a lower per capita gun ownership but a similar smaller wealth gap.
Once we acknowledge this correlation we can then attempt to dissect it. Until then everyone have fun putting anti itch cream on their privates to get rid of that athlete’s foot problem.

Comparison of the wealth gap between provinces in canada and usa