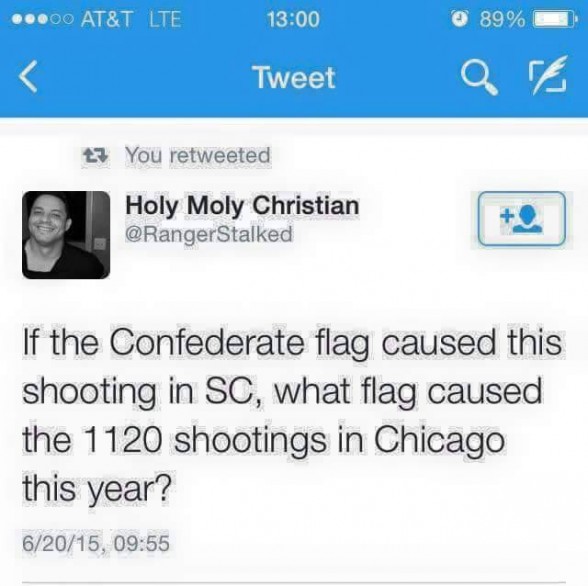 Meme Busting: One of the reasons Racism survives is because good honest people in America do not have good thinking and reasoning abilities. Their lack of Critical thinking skills is why bad arguments can be presented to them and they accept it because they think it is reasonable and sound logic. I’m about to post a portion of a conversation I had with some people who posted this meme believing it was a good argument. Someone with even moderate thinking skills should have seen the flaws in this argument.  This meme is part of the backlash against the large public support of rejecting the confederate flag after the Carolina Church shooting.

My response: (OP = Original Poster) OP false equivalence. and Strawman. No one argued that an inanimate object killed someone. Misrepresenting the arguments in this issue is not a sign of Unity or even attempting to have Unity when there is a tidal wave of support in one direction. What agenda does it serve to try to find a way to argue against the prevailing support by trying to bring up “black people” in Chicago as a false comparison? Does it really hurt that bad to just support the vast majority of people in the nation on this issue for a change? Or is it a must to always take the opposite position ?

Now lets talk about why the OP is a false equivalence. Has anyone argued that the Flag by itself caused someone to murder someone? No they didn’t. Lets say someone DID say that. Is that the prevailing argument that most people in opposition to the flag are taking? Or is this your personal take away from it? If it is your own personal take away it is possible that your conclusion is not the conclusions others are sharing. So to be fair to your opposition you should look for the strongest and cleanest argument they are presenting.

Did someone walk through this process before accepting this argument. I think not. If they did they would have seen a far more complex but simple to follow argument against the Flag. Even Jack Hunter the southern avenger who defended that flag for many years has changed his position.
A common argument I’ve seen against the flag is that it is a symbol of hate which white supremacists are proud of. So by having this symbol fly at the state capitol it can suggest that the state honors the hate which is the premise for the support of White supremacists. Yes it may mean something different to other people. But as long as there is confusion it will always give the white supremacists something to be proud of that their state honors their symbol of hate. By removing the Flag it suggests that the state and everyone else is taking a stand against hate.

Next lets look at the comparison. Why is Chicago significant for a murder comparison? If murder and what motivates murder in General is the contention then why not pick any place with murders and make that argument? Why not pick Flint Michigan which has a much higher per capita murder rate then Chicago? Or why not pick a predominately white area that has a measurable amount of murders? Chicago is picked because the OP wants to point at “black people” and put them under scrutiny. This is how i believe someone who believes their racial team is under attack so they must attack the other racial side. When instead it would be just nice for us to all unite for a change. I’m sure next month there will be plenty of other reasons for us to be in our separate camps as usual. ”
——————————-
Here is one person’s response:
Berry Muhl “Why is Chicago significant for a murder comparison? ”
Because it’s a very well-known example, and is in the news constantly not only for its crime rate but for its highly-publicized gun control and the political / organized crime corruption machine that turns out folks like Rahm Emanuel and Barack Obama.
Few people have even heard of Flint, Michigan, much less its crime situation.
——————————
My response:
Berry Muhl Your comment is almost spot on. But i would argue that the reason why Chicago was put on spot light is BECAUSE Obama is from Chicago and NOT because they have a higher crime rate.
Chicago has the largest NUMBER of murders but not the highest murder rate. Meaning Per Capita numbers. you know. Per Capita numbers is what is done with Abortion numbers when people want to point at black people and Per Capita numbers is what is done when trying to point out the number of Black people on Snap versus White people. But when looking at the GROSS total number. There are far more white people on Snap/welfare and more White people got abortions than black people.

So why have people accepted the false narrative to picking Gross numbers over Per Capita numbers only when Black people lead in that area? But then pick Per Capita numbers over Gross numbers if it yields the same results with Black people at the top? This is where Critical thinking comes in.
If you look at Per Capita numbers Chicago is far down on the list for murders due to how Big Chicago is. Chicago has almost 3 million people. Per Capita they aren’t even in the top 10. Chicago comes in at number 27. That’s right. 26 other cities have higher murders per capita than Chicago. means more people murdered per 100,000. Which is why i picked Flint Michigan.

Conclusion: Chicago being an argument presented for Murder comparison is a Media sham pushed onto people because they have calculated that the general public is not clever enough to see through this.

My personal opinion: Chicago is picked because people associate murder there with Black people and they want that to stick to the first Black President. Just my theory.

Despite recent Shootings Chicago no where near murder capital