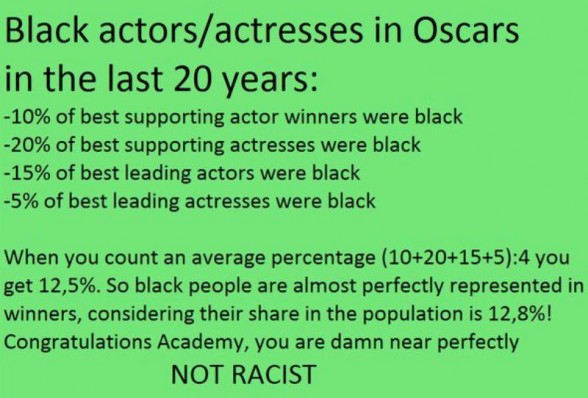 This meme is being pushed around as a rebuttal to the latest criticism from Jada Pinkett Smith of the lack of Black Actresses/Actors being nominated for Oscar Awards in 2016. With out even running the numbers or investigating the premises of this meme A Critical Thinking look at how this meme frames it’s argument exposes it’s faulty reasoning. Rendering the research of it’s premises as not even necessary.

The meme is premising the percentage of Black people who have received an Oscar in the last 20 years as a proportional representation of their total population numbers in the United States. It should be comparing the gross numbers of black people in all of the Films NOT the population of people in the country. these are different numbers.

Why the selection period of the last 20 years? Were black people not included in Movies until 1995?

If this was done correctly it could potentially help the argument or weaken it. For example what if black people make up 50% of actors/actresses in movies but only make up 12% of the awards. Then that MAY be a problem. But what if black people are .05% of actors/ actresses in movies? Then that would mean their award total would actually be larger than their representation in the movies they have been in.

From there then we could look at what is the Criteria judges and who is responsible for presenting the awards. What Pool of movies over the selected 20 year period are judged?

Lack of Critical Thinking Skills is why memes based on faulty reasoning get passed around as intellectual brilliance.

Oscar 2016 Everyone who boycotted the awards and why